It's UNIQUE & ORIGINAL ART WORK that's designed to entertain by Mocking, Poking Fun, Mimicking, Parodying MOVIES & their CHARACTERS by using the "LITERAL SENSE" of Words, Ancient Origins of Names then toss in some humor and "SPIN THE LIFE out of THEM".

HERE IS THE TRUTH AND ABSOLUTE TRUTH.......ish!

The below (6) T-Shirts are available NOW with FREE Shipping to the lower 48 States.

Click/Tap Images Below To Enlarge Artwork... 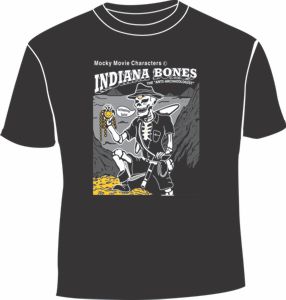 He thinks Archaeology is severely over rated and... 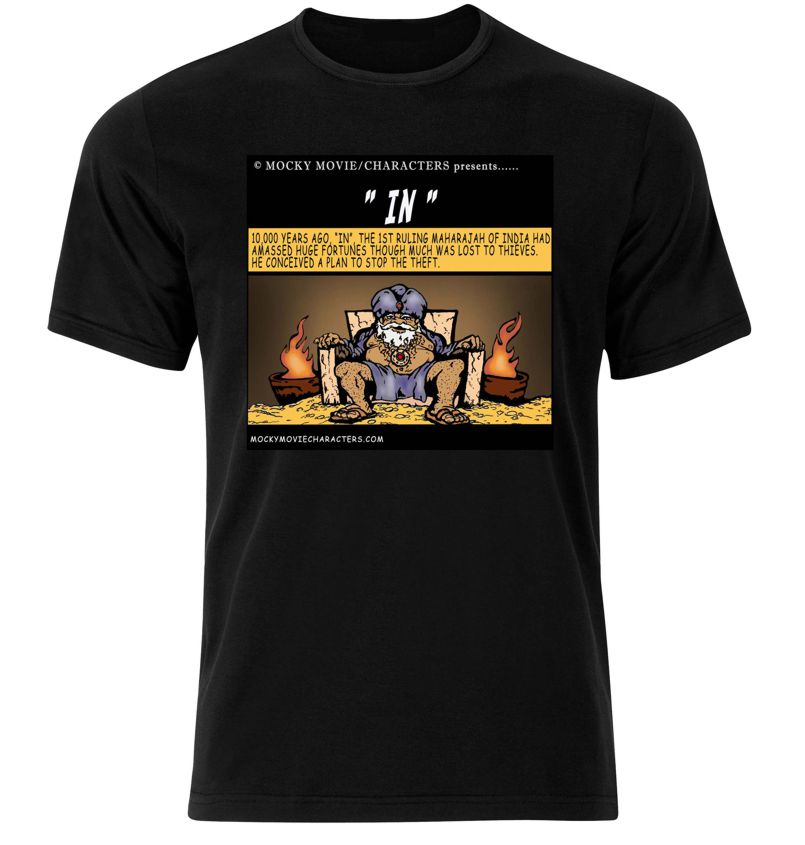 IN’s” plan was to get the greatest Detective on Planet Earth, DIAN BO, to hide his vast wealth but there was . . . 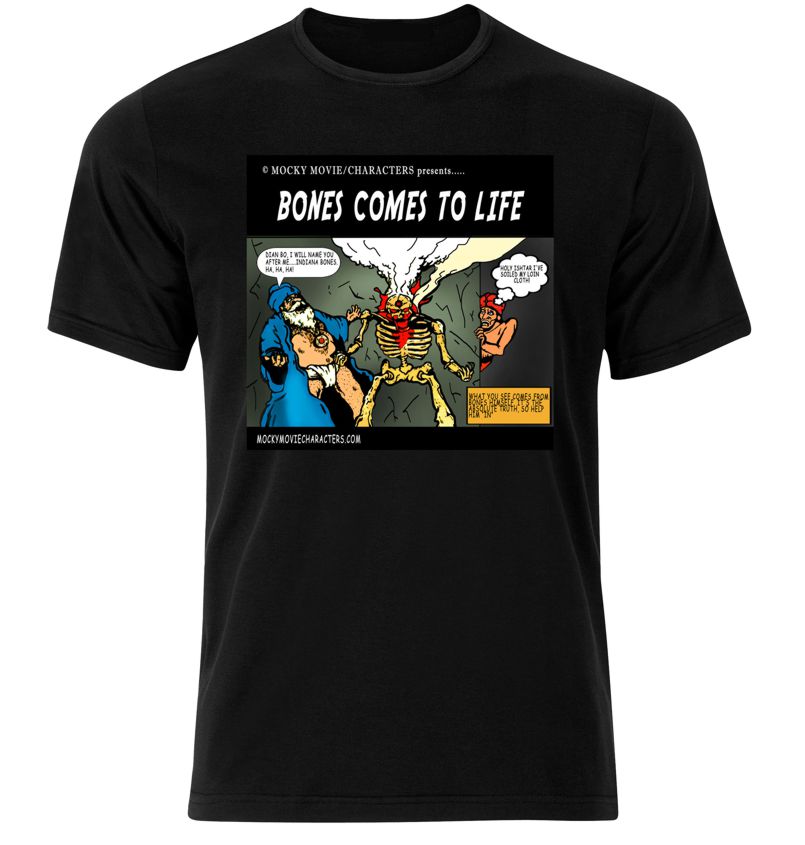 "IN" had him dug him up and set about “reincarnating him” with a Fiery Potion and a Magical Ruby . . . 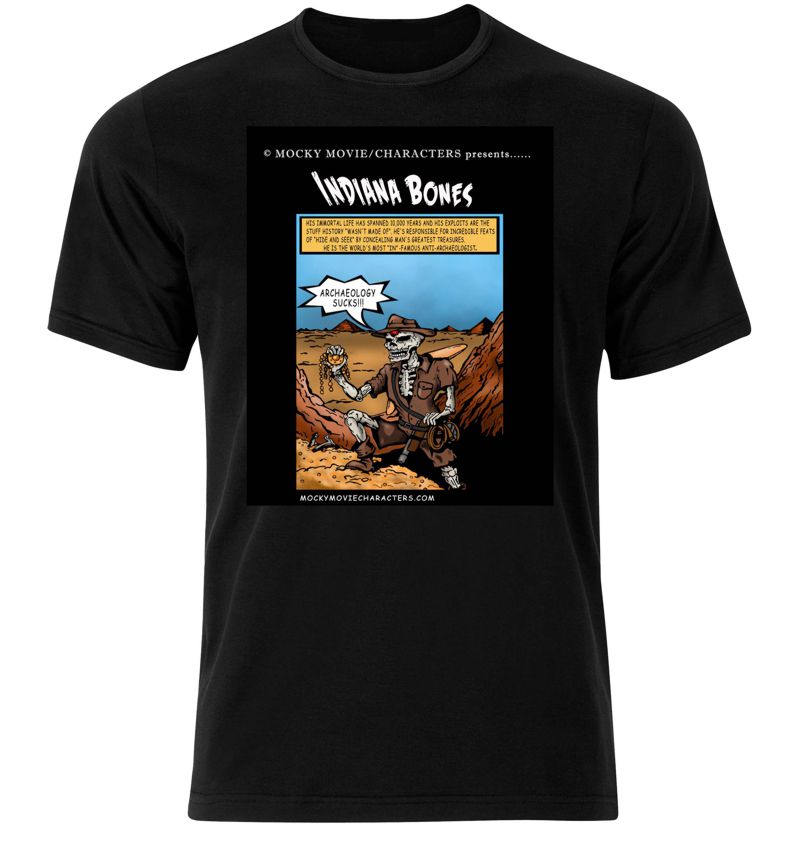 INDIANA has hidden Treasure for every Ancient Ruler for years. He thinks Archaeology is severely over rated and . . . 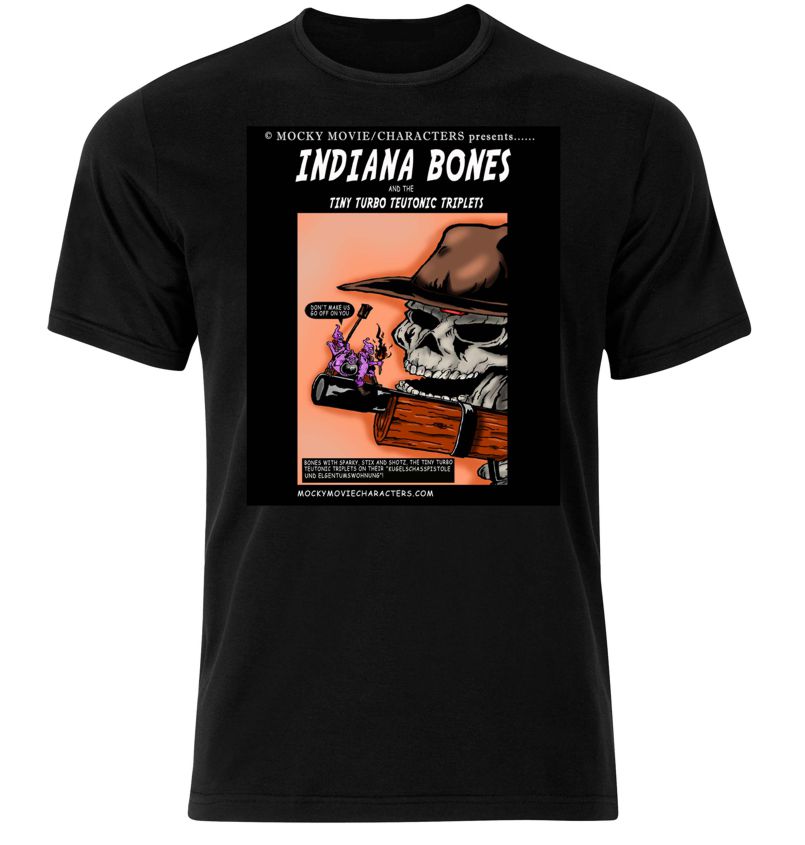 The TRIPLETS were a gift to Bones from the 1st Ruler of Germany “Teuton”, for hiding his Treasures and they . . . 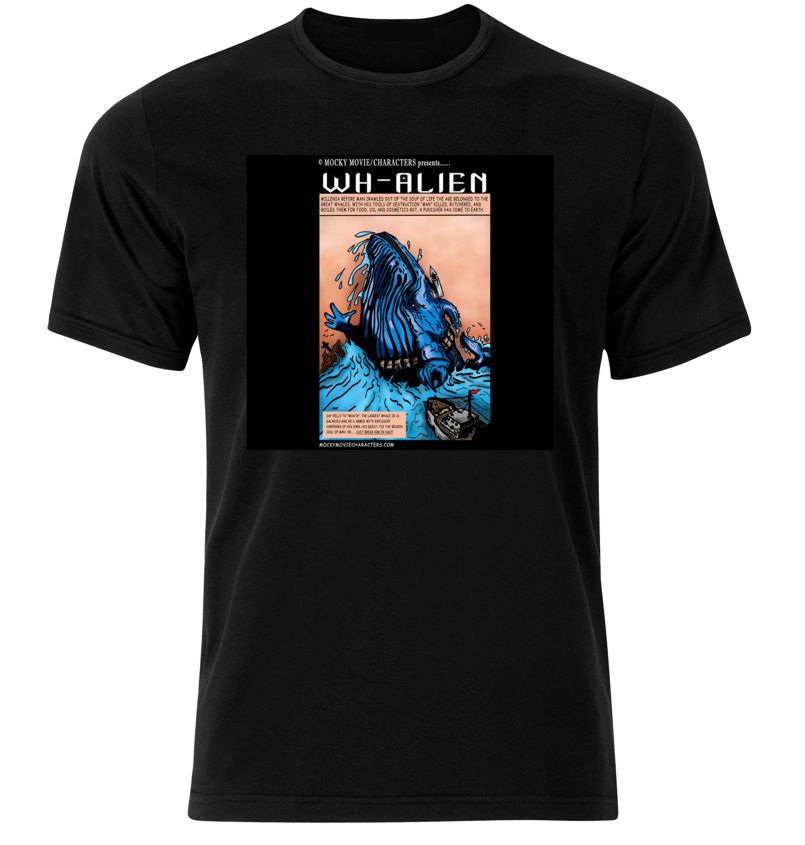 WH-ALIEN: His ancestors were taken by Aliens to their Planet where they evolved differently over millions of years . . . 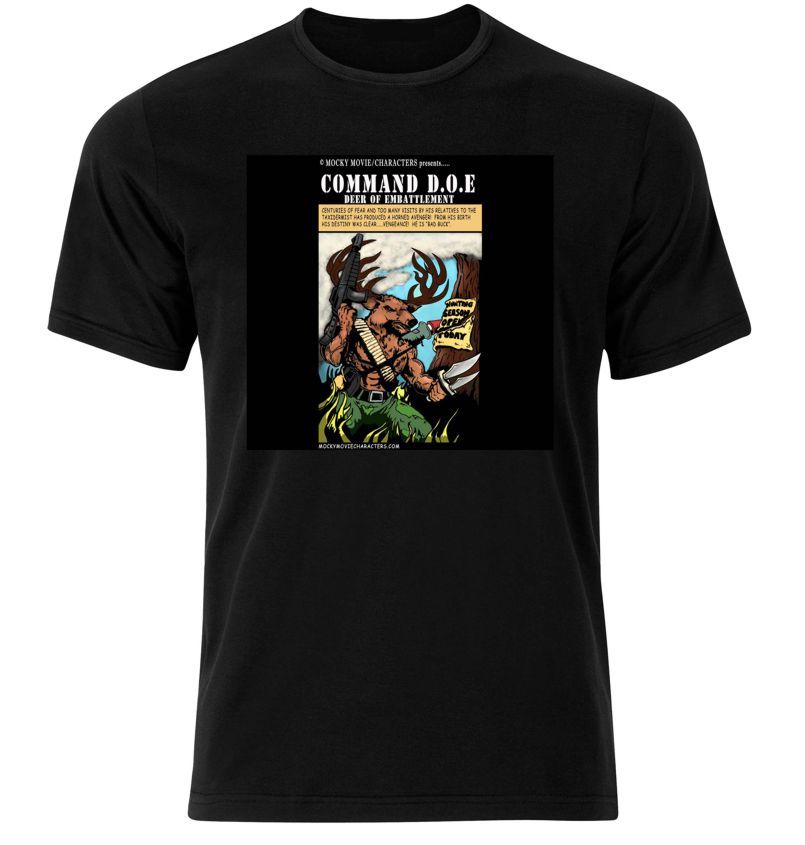 COMMAND D.O.E. (Deer of em-Battlement): After watching his mother killed by hunters he became as savvy . . .

THE IRON MAN ...  Literally, really ... no! Mine is: A large Yellow "CLOTHES IRON" has Arms, Legs and stands erect on its “Orange Tennis Shoe covered feet". It's Face shows a look of “contempt”. A wire from its back is plugged into a socket. Caption: "I Can FLATTEN The Steel Man" !

A NAKED GUN ...  Again, really? ... Mine is: Under an outside shower a “Colt 45 style Pistol” stands on its feet with a pair of Pink Water Wading Shoes on. It has a "red embarrassed face as it holds its Hands over its Trigger". Caption reads: HEY! ... I'M NAKED HERE!

A DAY THE EARTH STOOD STILL ... Don't think so. Mine is: Earth is "leaning backwards with a determined strained look on its face"; Its arms are out in front of it with hands upward; its very long legs have "red tennis shoe" covered feet that are skidding and tossing up clouds of vapor. Caption reads: " I'M DIZZY and I'M NOT MOVING TODAY ... GET OVER IT !"

THE BRAVE HEART ... Sooooo, you do know what's coming, don't you? A realistic "HUMAN HEART" has a determined Face, Arms, Legs and Chest; it's covered in Armour. It has a Sword & Shield and faces an Army in the distance ... alone. Caption: " BRING IT ON, I am the HEART" !

STAR'S WAR ... In the blackness of Space, "Several Military Uniformed Stars with Combat Boots on hold Gold Cannons that fire Green Laser Beams at each other". Caption reads: 9 billion years later; still no direct hits. (It's an endless Star War!)

DEFINATELY DUMB & DUMBER ... Around a campfire, "one wide eyed man in pain" has his hand in the fire and his "fingers are flaming". Another "man is smiling" and is about to put "his butt into the fire"! Caption reads: Really...seriously... damn!

"THE" CAPTAIN AMERICA ... On a Map of the United States (including Alaska and Hawaii) is an appropiately dressed Army Soldier with Combat Boots and a rugged face with Captain's Bars on his shoulders. His Right Hand rests on Alaska, his Left Hand on Maine, his Right Boot rests on Texas and his Right Boot String encircles Hawaii. His Left Boot rests on Florida. Caption reads: RELAX, I'VE GOT YOUR SIX!

A REAL SPIDERMAN ... A large "Smirking Spider" stands with 2 White Tennis Shoes on and six--6 shooter Pistols in its hands. On his Red T-Shirt is a "Frightened Man's Face". Caption reads: "Spider Webs, please! You're out gunned".

THOSE FRIED GREEN TOMATOES ... 3 Green Tomatoes stand on Orange Tennis shoes in a Frying Pan half full of bubbling oil ; their faces show FEAR. Their hands and ARMS are on the top of the PAN and have Burn Marks with Smoke coming from them.  Caption reads: "WAIT ... WAIT ... WE WERE INVITED FOR DINNER"!

A TEXAS CHAIN SAW MASSACRE ... Inside the shape of Texas sits a “partially cut Tree”. Below it is a “dismembered Yellow Chainsaw with parts scattered about. Smoke billows and oil is leaks from it. A "double bladed Ax is buried in its motor". Caption reads: “Karma” ! ...  (Think about it.)

A HIGH NOON ... Wearing dirty white underwear and T-shirt and standing on wobbly legs is the word "NOON"; its face is Pale Green with Blood Shot Eyes, its Hair is a mess. Beer cans litter the floor. Caption reads: " I'm not loaded ... I'm HIGH" !

THEY'RE OUT OF AFRICA ... With "fearful faces": An Elephant, Rhino and Gorilla with Pink, Orange and Green Tennis Shoes on carry matching colored Suit Cases as they pass a Sign that reads; You're Leaving Africa". Caption reads: "They're Killing us in there, Do something" !

THOR ... A "perturbed Odin sits with a PATCH over his Right eye trying to watch his "Rabbit Eared Antenna TV", it's fuzzy. Young THOR Bangs his Hammer on the stone floor "creating lightening". Caption: I'm trying to watch TV ! "Bang that hammer once more and you can KISS having your own World good-bye"! (Kids ... right !)

GOLD-FINGER ... A man stands from the waist up, grinning. He holds his RIGHT INDEX FINGER up; the TIP is covered IN GOLD. His RIGHT NOSTRIL has GOLD in and around it. Caption reads: Hummm, where did the GOLD originate?!

FORCE AWAKES ... The Sun shines through a window on the word "FORCE" that has a face, arms, legs and wild hair with white ruffled socks on. It Yawns with arms out stretched. An Alarm clock buzzes, it reads 4:30 A.M. Caption: “This being with you stuff ... has made me one tired #** Force”!

TRANSFORMERS ... On 2 different Utility Poles sits Transformers with smiling faces. They have arms, legs and Blue Tennis Shoes on. (Their legs are bent with their feet propped on the Pole. Their Eye Brows move up and down.) With one hand they take Bolts of Electricity from overhead lines; with their other they send the Bolts to house lines. Caption reads: If you want to be Transformed, "we're available for dating"!

THEIR'S WILL BE BLOOD ... A building's sign reads: "YOUR LOCAL BLOOD BANK, WE ONLY MAKE WITHDRAWALS". Caption reads: "We can suck the Life out of you faster than other Banks ... guaranteed" !

HAIRSPRAY: A FEMALE Welder's LARGE HAIRDO ...  SPRAYS out a MOUNTAINOUS MIST and seals STEEL BEAMS TOGETHER. Caption reads: Watch your Mouth boy, "I Can Seal it, permanently"!

CASINO ...  The SIGN on the Building reads; "THE CASINO LOOSEITALL". Coming from it is a very large VACUUM CLEANER HOSE that's SUCKING MONEY from all those walking toward it. Caption reads: Any Questions? !

A JUNGLE BOOK ... In the jungle, a Large GORILLA sits on a rock sipping a Beer and reading a BOOK. It's Title, UNUSUAL & FRIEGHTENING HUMANS that inhabit Cities and Towns of the world. Caption reads: "As if humans are the only smart ones"!

DA-STING ... A SMALL BEE with its GIANT STINGER embedded in a TERRORFIED MAN'S BACK. Caption reads: I Told You Not To Stare At My Wife, "Nobody Messes With My Honey"!

DIE---HARD ... The HORROFIED FACE OF THE word DIE is falling from the SKY. Directly below it is a LARGE BLOCK of CONCRETE, Next to it is a LARGE STACK of PILLOWS. Caption reads: Enough said!

MEANING OF LIFE ... The Word LIFE with a SUIT on and closed eyes rests UNDER GROUND with COFFIN OPEN and FLOWERS on top of its grave. Another Word LIFE is standing above ground with a suit on holding his HEAD with his HANDS. Caption reads: "PHEW....IT COULD'VE BEEN ME!"

THE MIDNIGHT COW-BOY ... At NIGHT, a smiling YOUNG BULL Checks his WATCH as he sits by a CAMPFIRE dressed in his cowboy attire. Over the fire is a TIED UP Man.  Caption reads: 12 O'CLOCK ... "ALMOST TIME FOR HUMAN SNACK"!

ZOOTOPIA ... A horrified man sees a “Spirit Monkey" Ooze out of "an even more horrified Man's Chest” ! Caption reads: "That's right, check it out"!

One more and don't be offended........I think God must have a sense of humor. (How else would we have one, right?)

TEN COMMANDMENTS ... The Robed Moses knells in the sand with Hammer and Chisel knocking off Commandment # 11 from the 3 rd TABLET.
Tablets 1 and 2 have the Roman Numerals I-X but cannot be read.

(Already chiseled off and laying on the ground is:)

A"BURNING BUSH" in the background has a Large Conversation Bubble coming from it that reads:)


OTHER CATEGORIES COMING IN THE NEAR FUTURE ARE: MUSIC/SINGERS, SPORTS/PLAYERS, POLITICIANS, COUNTRIES, STATES, CITIES, PLANETS and STARS.

I think you get the picture of MMC (no pun intended or.. was it ?) I hope you had fun visualizing the future Art Work and had fun with my original and unique T-Shirts as I had dreaming them up with my slightly demented sense of humor. (Okay, okay.......more than slightly.)

The Original Comic Book (Trio of Trouble) will be available soon...........Thank You.